When we look at the factors that caused our ancestors to migrate from one place to another, specifically within the United States, do we consider the effect that climate disasters may have had? Most of us are familiar with the Dust Bowl, which forced thousands of families in Texas, Oklahoma and Kansas, to abandon their farms, devastated by crop losses and unable to pay their mortgages and migrate westwards towards California.

For hundreds of years America was largely an agricultural society, dependent on the weather for providing good conditions for crop growth. Many of our farming ancestors lived or died by the harvest their lands produced. Climate disasters, and their accompanying economic losses, were catastrophic to families, and to communities.

In 1847, a 76-year old farmer by the name of Reuben Whitten died in Holderness, Grafton County, New Hampshire.1 Back in the summer of 1816, Reuben had harvested a good wheat crop which he had shared with his family and neighbors. Why was that act important? By sharing his wheat crop, Reuben saved his family and neighbors from starving at a time when all their crops had failed, and many of their sheep had frozen to death, in the summer. In fact, Reuben’s neighbors were so thankful to him, that family members later erected a stone commemorating his selfless act. 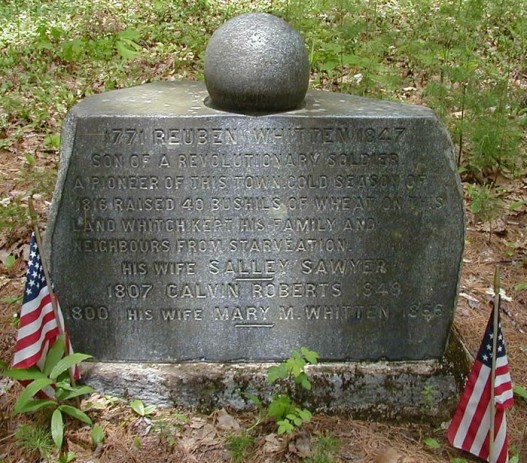 “1771 Ruben Whitten 1847
Son of a Revolutionary Soldier
A Pioneer of this Town. Cold season of
1816 Raised 40 Bushils of Wheat on this
Land whitch Kept his Family and
Neighbours from Starveation.”

How was it that crops failed and animals froze in what should have been the warm and sunny summer of 1816 in New England? What was the ‘cold season of 1816’ to which the words carved onto the headstone referred? Known also as the “year without a summer” or “eighteen hundred and froze to death”, 1816 was a year that few who lived in the New England region would soon forget.

No-one could have expected that the mild start to April 1816 would foreshadow a period of frigid temperatures, severe frosts and heavy snows. Summer would not come that year to New England. In Salem, Massachusetts, April 24 started off with a mild 74°F, dropping to 21°F within 30 hours. By May 1816, several cold spells had delayed planting and farmers began to fear that they would not have crops to sell or food to feed their families. The corn crop in Maine had frozen and strong winds and freezing temperatures from Canada killed the buds on the fruit trees. Warm days would bring hope to the farmers and a hasty planting of their crops, that hope only to be dashed a few days later when severe frosts would again occur. This cyclic change in temperatures would continue through September 1816, eventually bringing serious drought to the area and to much of the United States.

Newspapers across the region carried articles on the strange weather and the devastating crop losses. On 12 June, 1816, the Hallowell Gazette of Maine reported that there had been few days without which a fire was needed to keep warm, and that the “cold was so severe that vegetation seems to have been suspended.” 2

From New Hampshire, the Intelligencer of 6 September 1816, reported on various places hit by the unseasonably frigid weather and the damage to the corn crops. Ending the article with, “It is probable the year 1816 will have this remarkable designation, that there has been a frost in every month of it.” 3 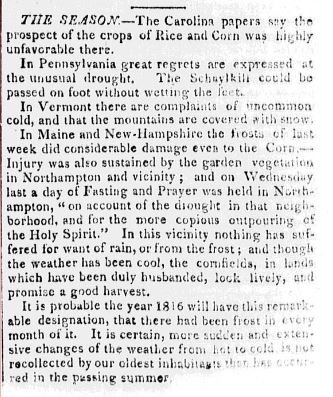 The extreme weather and resultant loss of crops forced farmers to leave the New England region. Many moved to western New York and into the Northwest Territory (covering the present states of Ohio, Illinois, Indiana, Michigan, Wisconsin and northwestern Minnesota). Their migration played a part in speeding up westward expansion in the United States and shaped what became known as the American Heartland. The movement of these farming families into what is now Indiana and Illinois helped found those states. 4

Consider again Reuben Whitten sharing his wheat crop with his neighbors in 1816.  It takes on much greater significance when we understand the context surrounding his act. He very likely saved some in his community from starvation.

If your family moved from New England around 1816-1818, it is entirely possible the ‘year without a summer’ may have been the cause.  Some 15 000 people left Vermont after the summer of 1816 for places west.

Climate disasters were devastating for our farming ancestors and their communities and may be the very reason they moved, searching for better conditions in which to grow their crops and support their families.

22 thoughts on ““Eighteen Hundred and Froze to Death””