This is the third post in my In the Parish Chest series. You can learn about bastardy bonds here and Settlement Examinations & Removal Orders here.

Was your English ancestor an apprentice? Apprenticeships date back to as early as the 16th century when young boys were formally bound to a master, usually a craftsman, who would teach the apprentice his trade. From 1563, the Statute of Apprentices made apprenticeships mandatory for anyone who wanted to take up a trade. This meant that no one could call themselves a Master of a trade without serving a 7-year apprenticeship.

Commonly, it was the child’s father who would put him up for an apprenticeship. It was more financially feasible for many poor families to apprentice out a child than to raise him.  In 1601, authority was given to the Overseers of the Poor for the parish, to locate an apprenticeship for any children who were orphaned or considered a pauper.

Although most apprenticeships were sought within the parish, there were times when the Overseers of the Poor would advertise in the local newspapers as seen below:1

Below is an example of an Overseers Apprenticeship Register for Rothwell, West Yorkshire.2  On 12 October, 1802, 11-year old Sarah Fothergill was apprenticed out to Nathan Nichols, a farmer.  Her father was David Fothergill and her mother was noted as dead. The family’s residence was noted as ‘no settled place’. Sarah would be apprenticed to Nathan Nichols for 10 years, until her 21st birthday. 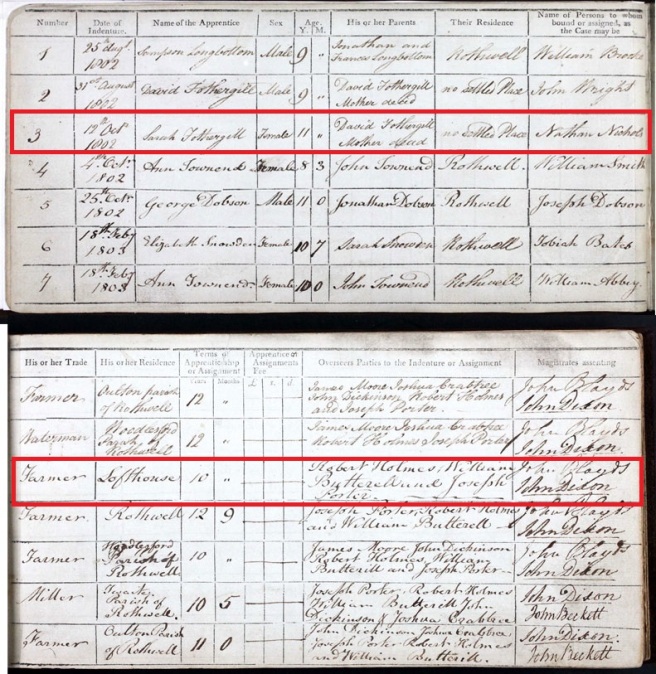 An Order of Indenture would then be created by the Churchwardens and Overseers of the Poor and presented to the Justices of the Peace for their approval. The proposed Master will have been interviewed as to his circumstances and character as well as the parents of the apprentice, if they were alive. The Overseers would recommend that the indenture be made.

In the example below dated 12 December 1818, a father, John Hollingrake has put up his son, William Hollingrake, as an apprentice. The order states that “William Hollingrake, a poor child, which its parents are not able to maintain” is proposed as an apprentice to Thomas Sutcliffe, a spinner, of the parish of Langfield, West Yorkshire. The Order of Indenture is signed by the Justices of the Peace and an Indenture is made.3

The Apprenticeship Indenture was a legal document setting out the terms for the apprentice and the master.  The age of the apprentice is given and the length of the apprenticeship. William Hollingrake’s indenture states he was 12 years and four months old and would serve as an apprentice to Thomas Sutcliffe until he was 21 years old. Thomas Sutcliffe is to teach William a trade, and “find, provide for, and allow unto his said Apprentice, sufficient wholesome and competent Meat, Drink, Washing, Lodging, Apparel, and all other Necessaries…during all the said Term.” The indenture also states that should Thomas Sutcliffe die within the period of indenture, the agreement would terminate within three months of his death. For the apprentice, they were bound to serve their master and willingly perform his duties and be a “good and faithful Servant”.4 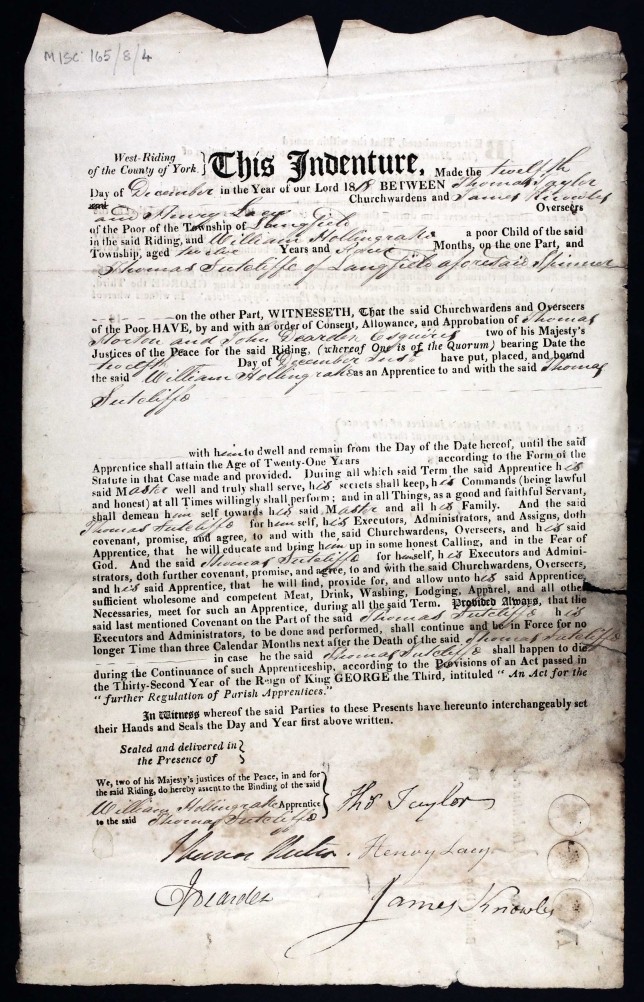 Some interesting facts on Apprenticeships:

Below is an example of a newspaper advertisement asking for the return of two apprentices who left their master “without sufficient cause”.5 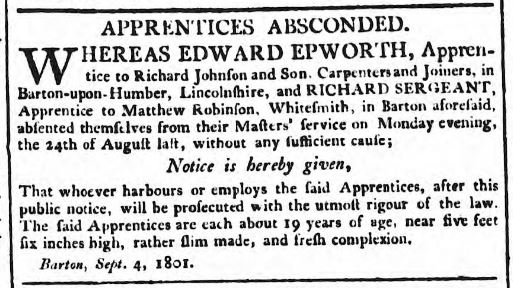 The information you might find on your apprentice will vary from document to document. You may find the names of the parents enabling you to move back a generation in your research. You will often find an age given of an apprentice, allowing you to calculate an approximate year of birth. You will find the trade learned which may help in distinguishing your ancestor from someone else with the same name. You may learn, as in the Hollingrake example above, more about the family structure, including siblings.

Apprenticeship in the United States

There are several extant records for Indentures and Apprenticeships in the United States. A search on FamilySearch.org for ‘apprenticeship’ in the Keyword search box on the Catalog page will result in a list of over 1,400 hits for both the United States and England. You can refine your search further by entering a location. For example, “Apprenticeship Alabama” will result in 13 hits.  The same search terms can be used on the other genealogy research sites to locate records there.

An excellent article on the history of apprenticeship in the United States can be found at the Washington State Department of Labor and Industries.

5 thoughts on “In the Parish Chest: Apprenticeship Records”